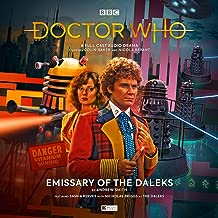 “Emissary of the Daleks” is a Doctor Who audio play and is the latest installment in the Monthly Range from Big Finish Productions.  It is written by Andrew Smith, directed by John Ainsworth, and stars Colin Baker as the Sixth Doctor. Nicola Bryant returns to her role of Peri. The guest cast includes Saskia Reeves, William Ellis, and Bruce Alexander.  Nicholas Briggs fires up the voice modulator to voice the Daleks.

The Doctor and Peri arrive on the planet known as Omnia where they quickly find that it is occupied by the Daleks.  Reeves plays Magister Carmen Rega,  who is governing the population on behalf of the Daleks.  Since the Doctor and the Daleks are long-time rivals who cross cosmic paths with destructive results, the Time Lord finds this arrangement to be quite unacceptable.  There is an emotional element in that the Magister has an estranged son who rather resents the surrender that was negotiated to save their remote little world.

There isn’t much that feels groundbreaking in this particular Dalek story.  It’s competently written and even more enthusiastically performed.  Baker once again excels at leading the action with his energetic delivery.  He and Bryant continue to prove their worthy chemistry as performers.  Peri continues to come off better than she was allowed in her television appearances all those decades ago.   There isn’t really anything that felt wrong while listening to this, but I am not sure there was anything to help it stand out.  It’s pretty good, but that it likely more due to the cast performances rather than any ingenuity in the writing.  Still, Andrew Smith has a long history with the program and does have an impressive record of coming up with some intriguing adventures, and I do want to see him get handed with plenty of opportunities from Big Finish. The one just didn’t turn out to be one of is more memorable contributions.