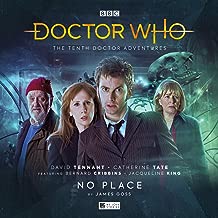 “No Place” is a Doctor Who audio drama from Big Finish Productions and is written by James Goss, directed by Ken Bentley.  David Tennant returns to role of the Tenth Doctor, alongside Catherine Tate as Donna Noble.  Jacqueline King and Bernard Cribbins are back as well as Sylvia Noble and Wilf.  The gang is all here from the fourth series of the revived television series.  Joel Fry and Peter Singh round out the cast guest as well.

The episode starts off with the listener getting acquainted with “Haunted Makeover”, a supposed reality show about making over homes with haunting reputations.  The Doctor and Donna are there posing as a married couple who own the house with Sylvia and Wilf along for the ride.  Of course, the Doctor and Donna aren’t all that natural behaving as if their in marital bliss, so lots and lots of gags involving ridiculous pet names ensue.  I know the banter between the Doctor and Donna are one of the highlights of that pairing for fans, and I do like it too for the most part.  However, it threatened to distract me a bit from the story.  It seemed that Goss got a little carried away with it at times.  It took a while for the justification for Sylvia and Wilf being in on this story to be satisfactorily explained, but it ends up working out.  At least, I was okay with it.

The episode is an enjoyable little romp for the most part, but a little bit of toning down on the antics of the Doctor and Donna would have been appreciated.  It was still good to have a new adventure with this particular cast and revisit an era of the series I have appreciated a bit more in recent years.