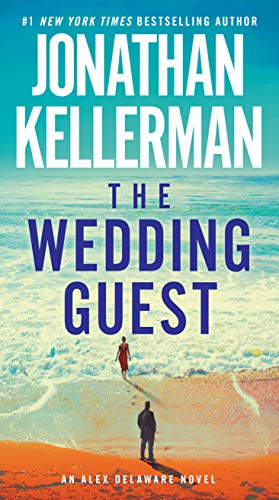 The Wedding Guest is a recent mystery novel by Jonathan Kellerman which again features consulting Los Angeles psychologist Alex Delaware as he comes to the aid of homicide detective Milo Sturgis.  Milo has a pretty good one as a wedding reception is rudely interrupted by the discovery of a corpse.  A young woman has been murdered in the restroom and no one from either side of the ceremony knows her identity.

Not much new ground is explored here, but it’s still a reasonably enjoyment installment in the series.  It takes a bit more effort than usual for the victim to be identified, but the story manages to move along pretty well.  There’s plenty of sleaziness in the path of clues left for the two determined investigators since the reception venue was a strip joint at one time.  Kellerman does handle the more risque elements well enough to elevate this above just some trashy novel.  Delaware is a pretty easy protagonist to like due to a somewhat unflappable determination to help his friend, Milo.  No major shakeups have occurred in quite some time for Delaware, and I am sort if interested in seeing one happen.  I don’t know what I would want to happen, but it just seems like another case closed until the next one is published.

Overall, the novel is fine.  Kellerman once again writes a mystery intriguing enough to keep my attention, but I doubt I will remember much about this for any significant time. I suspect I drew a similar takeaway from the last Kellerman novel I discussed in this blog.

And so onward I go with my eternal and often random literary explorations.  I will next be reading Salvage the Bones by Jesmyn Ward.