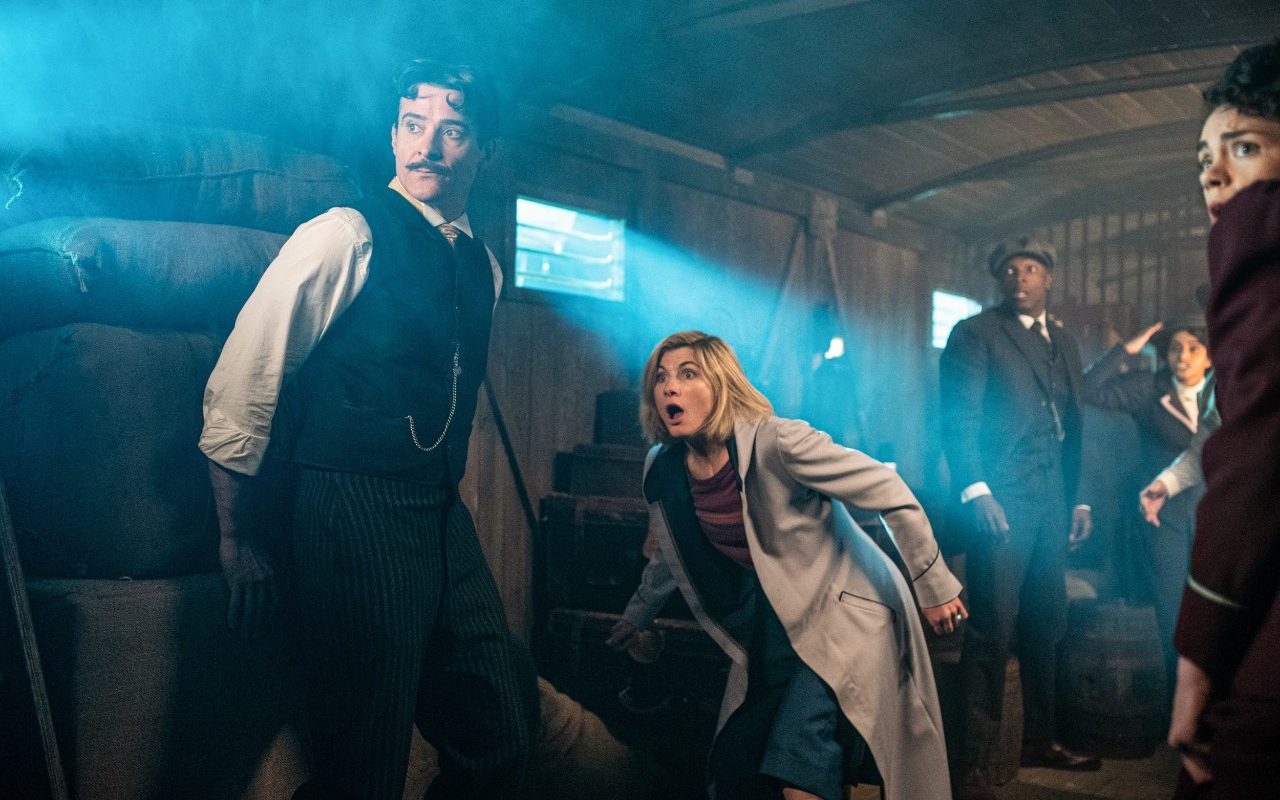 Nikola Tesla’s Night of Terror is the latest Doctor Who episode with Jodie Whittaker as the Doctor.  Mandip Gill, Bradley Walsh, and Tosin Cole are still aboard the TARDIS playing Yasmin, Graham, and Ryan respectively.   This latest story is written by Nina Metivier and directed by Nida Manzoor.   Goran Visnjic joins the guest cast as inventor Nikola Tesla.  Tesla’s rival, Thomas Edison, is portrayed by Robert Glenister.  Anji Mohindra and Haley McGee round out the main guest cast.

In 1903 America, The Doctor and her friends meet Nikola Tesla who is being hunted by a renegade alien knows as the Skithra Queen.  The Skithra are wanting to use Tesla’s inventive genius to repair their ship.  Thomas Edison also gets caught up in the mess, which does not help since he and Tesla are not exactly fond of each other.

This episode wasn’t terrible.  It’s not going to rank as any spectacular addition to the series, but I liked some of the ideas explored.  It reminded me of some of the earlier episodes of the Russell T. Davies or Steven Moffat eras.  Visnjic was pretty good as Tesla. Really all of the guest cast was pretty good, although I was not that impressed with the realization of the Skithra.  Mohindra did the best she could, I think.  I guess I didn;t find her all that menacing.  The Doctor dismisses her as a scavenger and bully.  I do like that we get a new adversary though. It’s just that I didn’t find her all that compelling or threatening if she needs to snatch an inventor from the early twentieth century to repair her ramshackle ship.

I am probably just getting used to Whittaker’s performance, but I didn’t find her performance too off the mark this week.  She just can’t quite come off as intimidating as some of the previous incarnations when she is being confrontational with whatever alien menace if before her for the week.

There is not much emphasis on the relationship between the companions this year, which is nice.  I still think the focus should be on the Doctor, even if this isn’t a favorite incarnation.

This may end up being one of the better episodes of the current year, but it’s not going to hold up much within the Doctor Who canon as a whole.  At least, I didn’t outright hate this one, which may be about as high as enjoyment is going to get as long as Chris Chibnall is at the helm of the production.