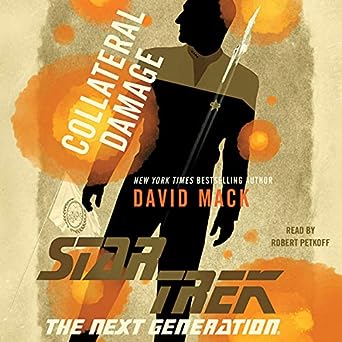 Collateral Damage is the latest addition from David Mack to the range of Star Trek: The Next Generation novels.

There are a couple of threads going on here that delve into the notion of unintended consequences and responsibility.  First of all, Captain Jean-Luc Picard returns to Earth to answer for his part for the murder of a deposed Federation President.  The covert section of the Federation known as Section 31 has been dismantled, but the secrets are coming out.  The captain, of course, was not privy to the murder, but he was included in the plan to remove the previous crooked leader.  He encounters an old adversary and meets a new ally in the form of a formidable attorney.

Commander Worf, meanwhile is in the big chair on the USS Enterprise as he tracks a group of pirates in possession of a horrific weapon.  The pirates though may have a legitimate ax to grind.

There is also return of another mischievous character seen only once in the television series.  I won’t spoil that one for any potential readers, but I had to double-check the episode to remind myself of this guy’s demeanor.

There are some jarring shifts in perspective throughout the novel.  I am not usually fond of shifting viewpoints, but Mack kind of makes it work here.

‘This novel concludes the fall out of the latest Borg invasion and the exposure of Section 31 to the general public, and it wraps up these stories pretty effectively.

Now, I am not sure if the current course in these novels is going to continue after more episodes from Star Trek: Picard are aired on CBS: All Access, but I hope so.

I ended up enjoying this entry quite a bit.  It was intriguing to see Picard face a serious enough situation which could tarnish his reputation if not have him imprisoned.

Next up, I will be delving into something I am not sure how to describe in the next literary venture.  It seems to be a series of collected thoughts and vignettes for The Book of Disquiet by Francisco Pessoa.