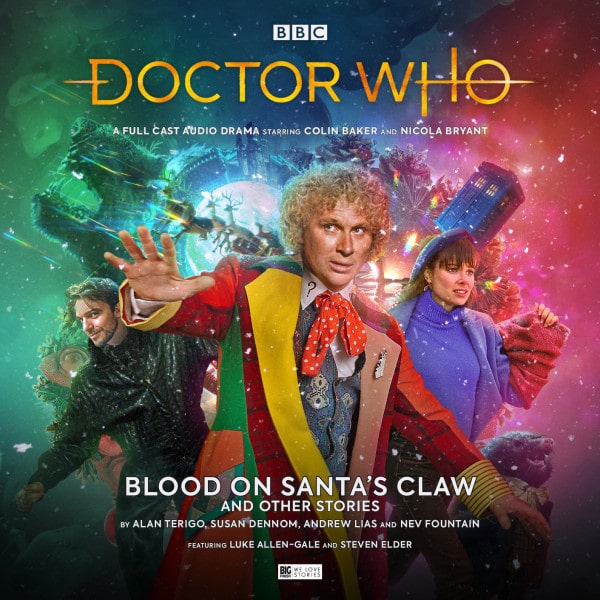 Blood On Santa’s Claw And Other Stories is a Doctor Who audio play from Big Finish Productions.  It’s an anthology consisting of four stories, or is it?  What we do know for sure is that is directed by John Ainsworth and that it stars Colin Baker and Nicola Bryant.  Peri has a boyfriend named Joe in this release.  Luke Allen-Gale joins the TARDIS crew, and the Doctor is a little put out.  That’s okay though, the Sixth Doctor is usually put out by something, but that’s what makes him so fun to listen to.

Blood On Santa’s Claw is apparently written by Alan Terigo and has the Doctor, Peri, and Joe find themselves in the 59th century where they find a murdered creature in a Santa suit and talking animals in Shakespearian garb.

Allegedly, Susan Dennom wrote The Baby Awakens Peri has a chance to see what parenting could be like when she, the Doctor, and Joe investigate a clinic that can create “designer babies”.  Of course, there is something a little more menacing lurking under the potential for a Christmas family gathering.

I Wish It Could Be Christmas Every Day is rumored to be written by Andrew Lias in which the Doctor and his companions land again in the 59th century in the middle of the longest Christmas party ever held.  But a trap is waiting underneath the festivities.

All is revealed in Nev Fountain’s Brightly Shone The Moon That Night, and it’s not a bad twist.

Colin Baker’s version of the Doctor continues to dominate in the Big Finish stories much better than in his television era.  He and Bryant still show a formidable chemistry even after all these years.  There ends up being more to Joe than I anticipated.

The guest cast includes Heather Bleasdale, Dawn Murphy, and Cliff Chapman.  Everyone is well chosen, which is typical of Big Finish.

There is quite a few clever surprises and red herrings in this release which ends up with a decent payoff.