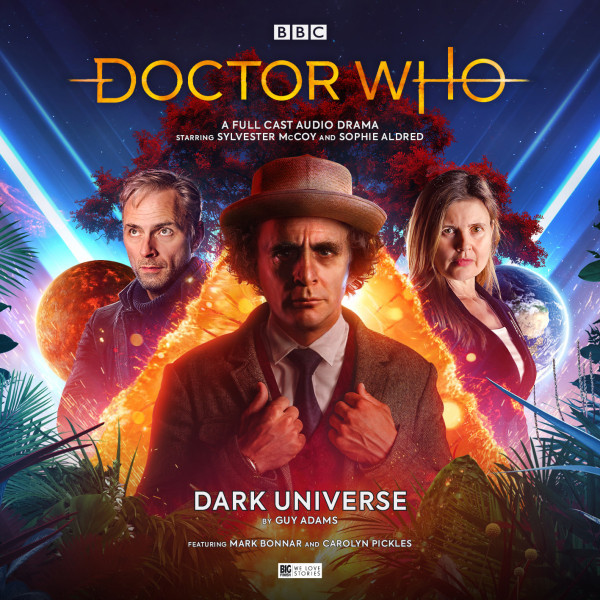 Dark Universe is a Doctor Who audio play from Big Finish Productions and is written by Guy Adams.  Ken Bentley serves as director once again.  Sylvester McCoy makes a welcome return as the Seventh Doctor alongside Sophie Aldred as Ace.  Mark Bonnar returns as the Eleven, the Time Lord who does not entirely shed his previous selves when he regenerates.  Carolyn Pickles, Damian Lynch, and Glen McCready are part of the guest cast as well.

The Eleven was first introduced as an adversary for the Eighth Doctor in the saga known as Doom Coalition, however there was a prequel scene that alluded him to being captured by Seventh Doctor. This episode chronicles that encounter between them.

Also, Ace has not seen the Doctor for twenty years and is CEO of some organization known as A Charitable Earth.  The Doctor has turned up to enlist her help with his latest caper involving the Eleven, who has cooked up another scheme to take over the universe, in keeping with one or two other maniacal renegade Time Lords.

There are some interesting elements such as Aldred playing an Ace who is closer to her own age.  She has lost none of her spirit or scrap in her more mature years.  Aldred and McCoy continue to demonstrate their affection and chemistry in their performance, even if their characters are seemingly at odds.

Bonnar’s performance seems to be reminiscent of the Joker at times.  He has gotten better at making the various personalities of the Eleven more distinct.  I am actually learning to appreciate him more as a somewhat unpredictable foe for the Doctor.  It’s an intriguing idea to have a Time Lord who has to live with all of his previous incarnations rattling around in his head and emerging at times from the current body.

I found the episode to be reasonably enjoyable, although some of the action scenes weren’t always that clearly presented.  It’s not really a comedic installment, but McCoy gets to act out some of his more clownish tendencies.  I actually have come to enjoy McCoy quite a bit in the Big Finish contributions.

The full story of how the Seventh Doctor captured the Eleven was inevitably going to be revealed before they clash again in Doom Coalition, and Adams provides a solid story.  I do not see this as being regarded as any sort of classic among us Big Finish listeners, but I found plenty to enjoy.