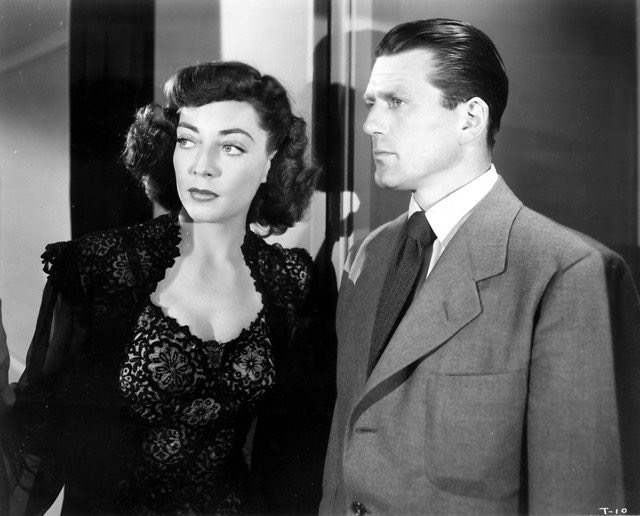 The Narrow Margin is a thriller released in 1952 and stars Charles McGraw, Marie Windsor, and Jacqueline White.  David Clarke and Paul Maxey are also part of the cast.  Richard Fleischer directed this film which was written by Earl Felton.  Felton apparently got the idea from a story conceived by Martin Goldsmith and Jack Leonard.

McGraw plays a tough, cynical Los Angeles detective who has to escort the widow of a mob boss from Chicago in order to testify in California.  The assignment gets a bit more messy when Sgt. Brown’s partner is gunned down just as they are picking up the woman to take to the train depot.  Brown and the widow are able to get aboard the train but still have to share the close quarters with the hit men sent to eliminate them.

Windsor plays the widow, whose cynicism and mistrust is a match for Brown’s.  White plays a fellow passenger who may be more than she seems, although she quite understandably catches Brown’s eye.

There are some aspects to this film that seem a little cliche by today’s standards, however I rather liked this film.  I liked McGraw’s performance.  Sgt. Brown is rather surly and abrasive but somehow likable. Well, I liked him anyway.  He connects with a young boy with a rather overactive imagination, so there is a balance between his single minded toughness and a more compassionate streak.  McGraw and Windsor had a pretty believable antagonistic chemistry.  The story did have some interesting twists if somewhat implausible twists.  Not everyone aboard the train was just an innocent bystander.  I also was impressed with a pretty convincing fight scene between Brown and one of his would-be killers. Who doesn’t appreciate some decent close quarter fisticuffs?

There are plenty of thrillers that take place in confined areas such as trains, but this particular film was one of the better ones.  It seems like the kind of film that would have some two dimensional characters, however there was a surprising amount of complexity in the leads.

For any  movie lover who is wanting to see some more of the classics such as myself, I would recommend to catch this one.  It’s not a very long movie, but there was plenty to enjoy.