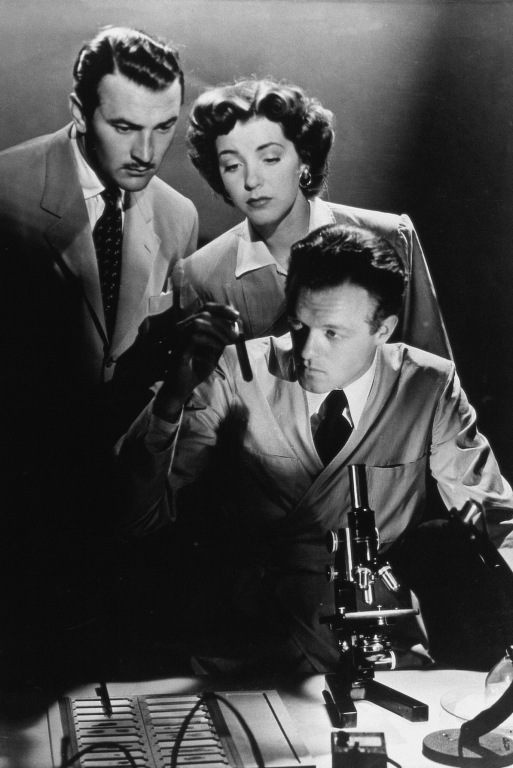 Kid Glove Killer is a crime film released in 1942 and was directed by Fred Zinnemann.  The screenplay is the work of John C. Higgins and Allen Rivkin.  The cast includes Van Heflin, Marsha Hunt, Lee Bowman, and Samuel S. Hinds.

Something shady is going in some unnamed city, and forensic scientist Gordon McKay is in the middle of it.  Van Heflin isn’t the traditional leading man for a film of this era.  His sardonic yet charming performance as McKay is actually pretty intriguing.  Marsha Hunt plays his lab assistant and has quite a meaty role as well.  They do have a charming banter going on throughout the film.  This is one of those thrillers where the audience knows the identity of the culprit.

Anyway, an ambitious attorney played by Lee Bowman is in deep with the mob.  The district attorney and mayor of this once again unidentified city are murdered.  Bowman’s character is also good friends with McKay, which could make the relationship a bit strained once his culpability is unearthed.

There’s a young kid about to be framed for all of this, and McKay is not sure the police are on the right track.

The film doesn’t have a long running time, however it does seem a bit slow at times.  I did like the chemistry between Heflin and Hunt.  I’m not sure about the authenticity of the science at the heart of this, but I found myself not really caring that much.

The film is actually quite charming. It also has Ava Gardner in an uncredited appearance.  This was before she was Ava Gardner.  The story was somewhat interesting, but the charm of the lead characters is what helps this piece out the most.

Anyway, in spite of a few flaws, this one turned out to be a pretty good distraction if a pandemic is creeping through the nation.