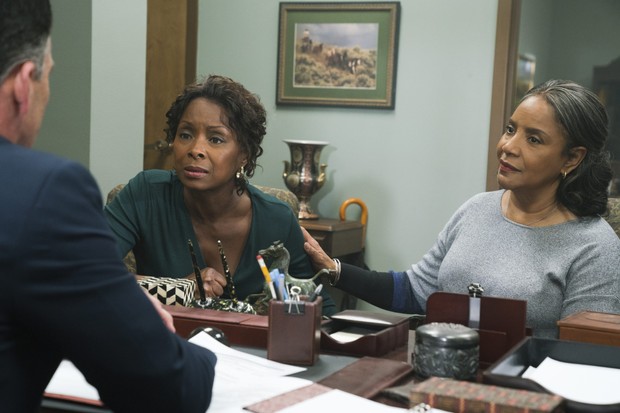 A Fall From Grace is the latest film written and directed by Tyler Perry and was released on Netflix a couple of months ago.  Perry himself takes on a supporting role with a cast that includes Crystal Fox, the always welcome Phylicia Rashad,  Bresha Webb, Cicely Tyson, and Mehcad Brooks.

Crystal Fox plays a middle-aged woman awaiting her trial for the murder of her younger husband.  Bresha Webb is the young attorney who is doubting her career choice and is afraid of trial.  She’s young, nervous, and somehow astute enough to sense there is a story that needs to be told since her new client just wants to take a deal.  Phylicia Rashad plays the ever helpful best friend of the hapless Grace Waters, who is facing life in prison.  Much of the movie unfolds in flashback as Grace is convinced to tell her tale of renewed hope in love and a subsequent horrible betrayal.

This is a mess, and it saddens me because I actually really like Tyler Perry.  I think he has good ideas, and the basic premise of this film actually isn’t bad.  The problem is I don’t think Perry does much research when it comes to police and court procedure.  I understand the films do need to take some creative license with those, however Perry’s depiction her is almost completely implausible.  Once again, the resolution seems rushed and just way too out of left field.

There is a talented cast here, and some interesting performances.  Perry’s dialogue is a bit cliche at times and just flat out unrealistic at others.

I really tried to like this movie just because I like Tyler Perry during interviews.  I found the lack of authenticity in what would actually happen in the courtroom really distracting.  Some of the clues being missed by the main characters was just annoyingly absurd.

I was just reading that a lot of technical mishaps such as boom mikes being visible and some continuity errors had occurred in the final film.  I guess I missed those because I was too perturbed about how the story is being told.

Some of these criticisms I have expressed before in other Tyler Perry projects, however I found this particular film to be the most glaring example of  his more questionable film making decisions.