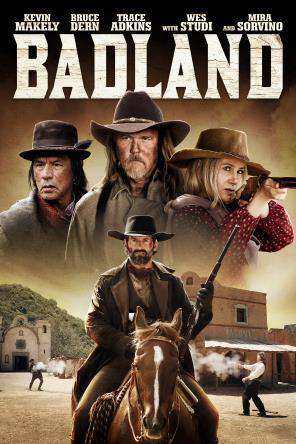 Badland is a western film written and directed by Justin Lee.  Nathan Makely is in the lead role as a Pinkerton detective who is tasked with finding the worst of Confederate war criminals.  Some of the other cast members include Mira Sorvino, Bruce Dern, Jeff Fahey, and Wes Studi.

The lead character has the great name of Matthias Breecher, who is on the hunt for various former Confederate leaders who misbehaved the most during the Civil War.  He encounters the daughter of one of his targets and begins to feel something other than his usual stoic determination.

Breecher is the usual cliche protagonist who lives a violent life but secretly yearns for a more peaceful existence.  He may have a path to that with the aid of a pioneer woman played by Sorvino.

This film is not too bad actually.  There is not too much originality in the writing though.  Breecher borders on being kind of a boring lead character in between gunfights and fisticuffs.  Fortunately there is just enough action sequences to keep my interest.turned

It can drag a bit at times, but there is quite a bit of pleasant scenery.  The performances were not extraordinary, but no one stood out as being noticeably bad.

The film was kind of interesting but nothing to get too excited over.