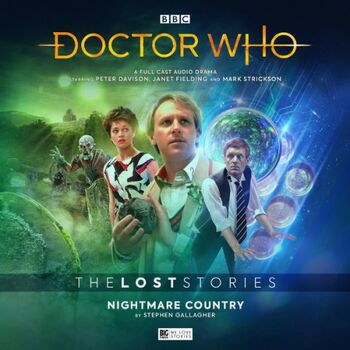 Nightmare Country is a Doctor Who audio drama produced by Big Finish Productions.  It is an episode from the range known as The Lost Stories, which were intended for the television series but for some reason never produced.  Stephen Gallagher is the writer with Ken Bentley in the director’s chair.  Peter Davison stars as the Fifth Doctor and is joined by Janet Fielding and Mark Strickson, reprising their roles as Tegan and Turlough, respectively.  The guest cast is comprised of Beth Chalmers, Ian Conningham, Edward Dede, and Tracy Wiles.

The story pretty much starts in the middle of the action with the Doctor finding himself on what is apparently a dead world with no memory as to his identity or why he is there.  The Doctor has a mission inside a simulator known as the Reality Engine.  He is in a shared virtual reality with an alien menace known as the Vodyani bearing down on him and the other visitors.  It is up to Tegan to enter the madness and help job the Doctor’s memory.

I ended up liking the episode in spite of some confusing elements.  The performances were all solid enough.  The Fifth Doctor, Tegan, and Turlough is favorite team for me, and I found that their chemistry together was as reliable as ever.  This was a pretty creative idea, and I enjoyed having the Doctor face an adversary unfamiliar to the fans.  Probably one of the main reasons for this story not actually being filmed was due to the production budget being too limited for the visual effects called for.  The sound effects were of high quality as expected from Big Finish.  Davison seemed pretty well engaged with this one.  The story is interesting in spite of some lack of clarity.  Some of that will probably come to light once I get around to listening to this one again.