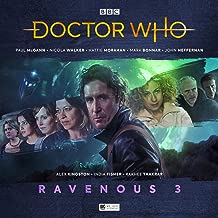 “Ravenous 3” is a Doctor Who audio boxset presented by Big Finish Productions.  Paul McGann stars in this one as the Eighth Doctor and once again is joined by Nicola Walker and Hattie Morahan as Liv Chenka and Helen Sinclair, respectively.  Mark Bonnar returns as the extra crazy Time Lord known as the Eleven with John Heffernan also on hand as the earlier incarnation known as the Nine, who really isn’t that much less nuts. The Eleven is a Time Lord whose previous personas stay in his current form after each regeneration.  It’s the Gallifreyan version of a split personality disorder.  As usual with these sets, there are four stories with writing credit split between Matt Fitton and John Dorney.

The Ravenous is some legendary cosmic hobgoblin who devours Time Lords, or as we now learn feeds on the regeneration energy when one is about to shed one life for another.  It’s a pretty good idea for a new monster, but I am not sure that it is quite worth four boxsets which adds up to sixteen adventures.

Anyway, Matt Fittons kicks off this series with “Deeptime Frontier” in which the Doctor and his companions escape a dead TARDIS and find themselves aboard a Gallifreyan research vessel in which other Time Lords have brought aboard a dangerous artefact.  Here, we are introduced to another Time Lords from the Doctor’s academy days with Damian Lynch playing Rasmus, a rather decent sort who is still not immune to the Time Lords’ more arrogant tendencies.  Long time Big Finish actor Dan Starkey plays another Time Lord named Braxis who makes a startling and politically correct transformation which causes the role to be taken over by Susie Emmett.  This adventure is a fine start.  There are lots of familiar claustrophobic type trappings which work well enough.

“Companion Piece” by John Dorney might as well have been called “Girl Power” since it is a self-indulgent romp in which most of the female assistants from the Eighth Doctor’s era take center stage as the Nine starts a rather troubling collection.  Yes, this is pretty self-indulgence and probably over the top, but it’s still well-written, which is typical of a John Dorney script.  Alex Kingston is back as River Song with India Fisher’s Charlotte Pollard and Rakhee Thakrar as Bliss pitch in to help out Liv and Helen who are the latest additions to the Nine’s macabre collection of the Doctor’s companions.  There are also a few pleasant surprise and familiar performances here.  Heffernan goes all out in his depiction of one of the Doctor’s zanier opponents and is just brilliant.  Kingston also continues to sound great.  It’s great that Charley still gets to drop in from time to time as well.  This episode is just a fun addition to the set with some great biting humor.  Nothing wrong with the ladies getting a chance of shine a bit without the Doctor on hand to rescue them, especially with Dorney penning it.

“L.E.G.E.N.D.” by Matt Fitton has the Doctor and his friends alongside a very unlikely, troubling ally as they meet the masters of folklore in the shape of the Brothers Grimm played by Leighton Pugh and Arthur Hughes. They also meet another alien researcher who is not quite as careful when it comes to her efforts to add to her database.  Also, fairy tales in this tale don’t stay within the realm of imagination.  The Doctor meeting the Brothers Grimm feels like something long overdue, but this was a fine story to finally hear that happen.

Then, John Dorney concludes this set with “The Odds Against” where the craziness of the Eleven’s affliction gets doubled.  The Ravenous is closing in and there are disguises being revealed.  This is a fairly typical chaotic ending to a series in which the next catastrophe is being teased.

Overall, this particular boxset ended up being pretty entertaining even if some of this felt like retreading of old themes and challenges.  Villains like the Eleven are a little hard to picture when they are presented only in audio form, so I am having some trouble imagining how that would look.  Frankly, I am a little worn out with the Eleven, or the Nine, or the Twelve.  Paul McGann sounds great but he always sounds great.  I do enjoy the dynamic between this particular Doctor with these companions.  The sound effects are quite convincing although some of the action sequences could have used a little better explanation.  There are some fun and intriguing ideas explored here but it falls just a little short of it being a grand slam or some other kind of jaw dropping sporting event.