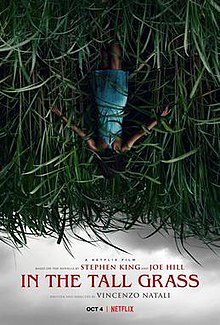 “In the Tall Grass” is a horror film recently released on Netflix that was written and directed by Vincenzo Natali, which really is a great name.  Too bad his film falls short of any real greatness.  Natali adapted it from a novella written by Stephen King and Joe Hill.  Patrick Wilson stars in this with several people I have never heard of, including Harrison Gilbertson, Laysla De Oliveira, and Rachel Wilson.

It starts off with a brother and sister traversing the country and coming to a stop just outside a huge field of tall grass across the street from an apparently abandoned church when they hear a young boy crying for help.  They go in and meet other lost people.  The sister is pregnant, and the ex-boyfriend shows up to get lost.  Everyone keeps having spooky sensations and coming across each other.  There is some big monolithic rock in the middle of this field which seems to be the source of all of this supernatural nonsense. Anyway, there is evidence of some kind of time distortion or something.  People who you thought were dead keep turning up.  This is just the most hellish field of tall grass one could imagine.

This may sound like a somewhat derisive description, but it had some promise.  Once again, it had an intriguing concept hear the beginning.  There are lots of Stephen King tropes and traditions such as some seemingly normal gut going off the rails.  The movie was a little hard to follow at times, but I suppose some viewers like a good brain teaser in their films sometimes.

It suffers from what I think is a common misstep in horror films in that the last third of the film where all the cards are laid out ended up being a bit of a disappointment and not much was resolved or explained all that well.

The cast was fine.  The visual effects were fine.  The movie was fine overall, but it’s a good thing I didn’t spend more than the monthly Netflix subscription for this.