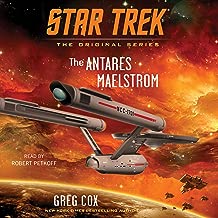 “The Antares Maelstrom” is the latest Star Trek Novel written by Greg Cox. Yes, this is the original crew…..Captain Kirk, Mr. Spock, Dr. McCoy, and everyone else.  It takes place in the latter half of the original five year mission.

The premise is that a distant planet has been found to carry a rare mineral that can be processed in a way to provide an energy source for the various starships and technology used by the various races of the Federation and other alliances.  A galactic gold rush has ensued, and the Starship Enterprise is sent to sort out the chaos.  Cox then establishes three story threads branching out from the initial plot, which isn’t a new idea, but he uses it effectively.  Lt. Sulu is left on space station to help the security forces there while the Enterprise goes on to Baldur III, the planet at the center of this turmoil.  Spock and Ensign Chekov are dispatched to investigate a smuggling operation involving an unusually potent tea which is coming from a relatively nearby world which is under observation as a developing civilization and should not be capable of galactic trading. All three of the branches end up being quite compelling. Sulu has to find a saboteur while Spock and Chekov have their own meddlers to discover.

I have read a lot of Star Trek novels over the years, and  would say this is one of the better ones.  Cox likes to reference previous episodes which is kind of appropriate but could get a little distracting as one tries to remember which details of those other  mishaps.  Cox does a good job of giving all of the regular characters some important moments.  Even Lt. Uhura had her moments of glory as well.

So the title refers to this tumultuous, unstable region of space that ends up having some secrets of its own.  Many of the other characters are privateers and prospectors looking for prosperity by fair means or foul.

Cox gives a good solid yarn that is mostly loyal to the original conception of these characters.  I had a little trouble imagining some of the actors saying the dialogue Cox presents, however I still ended up enjoying the story overall, and that really is the most important accomplishment.

So now that I saw the movie a few weeks ago, time to read the novel and hope for the best.  Up next to go under the reading lamp is Donna Tartt’s “The Goldfinch”.