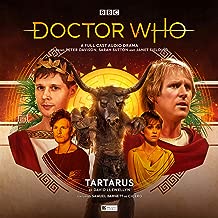 “Tartarus” is a Doctor Who audio play presented by Big Finish Productions and was written by David Llewellyn with Scott Handcock serving as director.  Peter Davison is back on deck as the Fifth Doctor with Sarah Sutton and Janet Fielding pitching again as Nyssa and Tegan, respectively.  This episode is rather a special one for Big Finish since it is a crossover into one of the newer original series about a rather important writer and orator in Ancient Rome.  Samuel Barnett joins the Doctor and his crew as Cicero.  George Watkins also lends his talents as a slave known as Marc, whose significance expands as the story unfolds.  Laura Riseborough, Joe Shire, Tracy-Anne Oberman rounds out the guest cast as well.

Even a Time Lord can be a fan of someone.  The Doctor brings his companions to meet Cicero, who has retired by the year 63 BC to the village of Cumae. During a small gathering, strange lights in the sky are a precursor to the Time Lord, Cicero, and company being whisked to a place where the ancient Roman legends and myths are coming to life, risking the lives and sanity of more than just the Doctor and his friends.

This was a pretty interesting and enjoyable installment.  I am not familiar with Cicero or Big Finish’s interpretation of him from their other series, but Barnett seems to be a wonderful foil for Davison and other main cast members.  Yes, there are elements that seem to be more for the sake of a good gimmick, but it works.  There was an effort to not have one lead character overshadow the other much, since both the Doctor and Cicero would have such strong and imposing personalities.  Indeed, Cicero’s gift of oration and debate does become important in this particular adventure.  It was revealed in the cast interviews that Watkins is actually a nephew of Peter Davison, so that was a pretty neat revelation.  Of course, Tegan has a rather overly bombastic disdain for the practice of slavery, which once again the writer sometimes makes her sound a little bit of an overwrought dunce.  Yes, we know that slavery is a very inhumane practice, however Tegan thinks that the practice should be overthrown before history runs its course.  Yet again, the audience has to endure another reminder of the devastating effects of such an endeavor.  I think at this point, Tegan can be toned down a little when it comes to her outrage and impulsiveness.  I think the writers can find ways to stay true to her character but still smarten her up a bit where the Doctor doesn’t have to give her the same repetitive chastisements.  Saying that, I like having Janet Fielding participating in these recordings, and she herself is an effective performer, but Tegan could stand a little more depth on a consistent basis and a little less yelling and bossiness at times.  Sarah Sutton was fine, as she usually is.

The relationship between the Doctor and Cicero was written quite well with what turns into just the right amount of rivalry once Cicero adjusts to his bizarre and threatening surroundings.  Llewellyn gets most things right in this script.  Maybe….just maybe, I will try out the Cicero series from Big Finish.