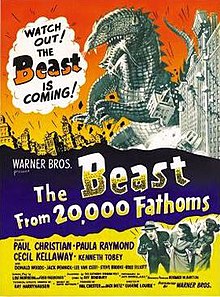 The Beast From 20,000 Fathoms is a 1953 science fiction film from Warner Brothers Studios.  It was directed by Eugene Lourie and was co-written by him and remarkably three other people.  Fred Freiberger, Louis Morheim, and Robert Smith all share the blame here.  It is interesting to note that the script is based on some short story by Ray Bradbury.  The film stars Paul Christian, Paula Raymond, and Cecil Kellaway.  It used the stop motion animation techniques that were popular during the era of film making.

It’s kind of a silly diversion.  It’s one of the early monster movies where some creature is roused by atomic blasts and starts to rampage across civilization.

The background and history of this genre of film is a bit more interesting than the actual story.  Although I suspect I would enjoy Bradbury’s original idea.  The performances didn’t really stand out. although I probably wasn’t all that captivated since I was not familiar with anyone in the cast.

It’s not that most memorable of cinematic efforts other than its place in the history of the genre.  I didn’t hate it, but I struggled to keep my attention on it.