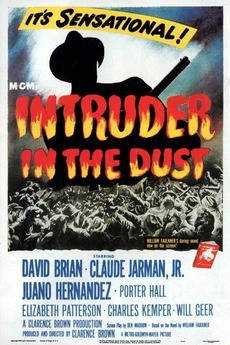 Intruder in the Dust is a drama film released in 1949 and was directed and produced by Clarence Brown.  Ben Maddow is the writer who adapted it to the screen from a William Faulkner novel.  The cast includes David Brian, Claude Jarman Jr., Juano Hernandez, and Elizabeth Patterson.

It’s not exactly a new story idea.  A black man stands accused of a murder he didn’t commit in a small Southern town.  A white kid who befriended him enlists his uncle, the town attorney, to help find the truth.  What is somewhat different is that the accused black man, played by Hernandez, is actually someone of some means.  He has property and a modest fortune.  Juano Hernandez does have a commanding presence in this film.

This is a pretty interesting movie, even if it has had a few iterations over the years.  It’s an interesting to see that a few white residents do actually come to his aid.  In one scene, the spinster played by Elizabeth Patterson faces down a mob that shows up at the jail to exact their version of justice.

The sets were quite impressive.  For a film of that time, it appeared that some money was spent on the production designs.  The town looked convincing.  The performances were pretty solid throughout.

The relationships had some depth among various characters.  Sometimes, films of this sort often make the racist characters seem rather campy and over the top.  This one makes it a bit more believable in this setting.

The movie sounds like a story that has been overdone, and it has.  However, this one was well made.  Most of the main characters were interesting.  It delved into the matter of racism with a more subtle and layered portrayal than other films of this sort.