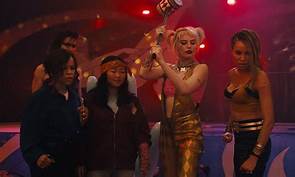 Birds of Prey (And The Fantabulous Emancipation Of One Harley Quinn) is the latest cinematic offering from DC Films.  Margot Robbie returns as the Joker’s now ex-girlfriend, Harley Quinn, who was once Harleen Quinzel. Cathy Yan directs the film which was scripted by Christina Hodson.  It is part of the world of Gotham City where Batman is often on the hunt for the most psychotic of criminals.  Too bad Batman isn’t around in this one.  The cast members are talented and include Ewan McGregor, Rosie Perez, Mary Elizabeth Winstead, and Jurnee Smollett-Bell.

The lethally quirky Harley Quinn has just been dumped by the Joker.  During her understandable period of grief and anger, she blows up a chemical plant and gets herself targeted by all the various miscreants she has crossed and angered.  She also has found herself in the crosshairs of a zealous detective. A diamond has been taken by a pickpocket who Harley has sort of befriended.  As much as Harley can cultivate a friendship, anyway.

The fight scenes were pretty well choreographed.  The soundtrack was actually quite enjoyable.  The visual effects were quite well….effective.  I actually had a mixed bag sort of reaction though.  Not all of the wisecracks and repartee landed that well.  Robbie does seem to have a lot of fun with the character, which actually seems pretty easy to pull off.

McGregor plays a gangster named Roman Sionis who also goes by the dubious moniker of Black Mask.  McGregor does well enough in the role, since I guess it’s supposed to be an over the top sort of psycho.  I found the depiction of Black Mask to be rather cliche.  He certainly isn’t that memorable of a psycho.

It’s kind of a fun girl power superhero popcorn flick.  It seems quite a while since I saw Rosie Perez in a film of any type of box office significance, and I enjoyed seeing her.  Steven Williams is another actor I haven’t seen in a while, and he was there playing the typical by the book police captain.  I like Steven Williams, so it was pretty cool to see him even if there was nothing too spectacular about his role.

The movie was enjoyable enough for me to not regret seeing it, but I don’t imagine it’s going to be considered any great addition to the genre of comic book movies.