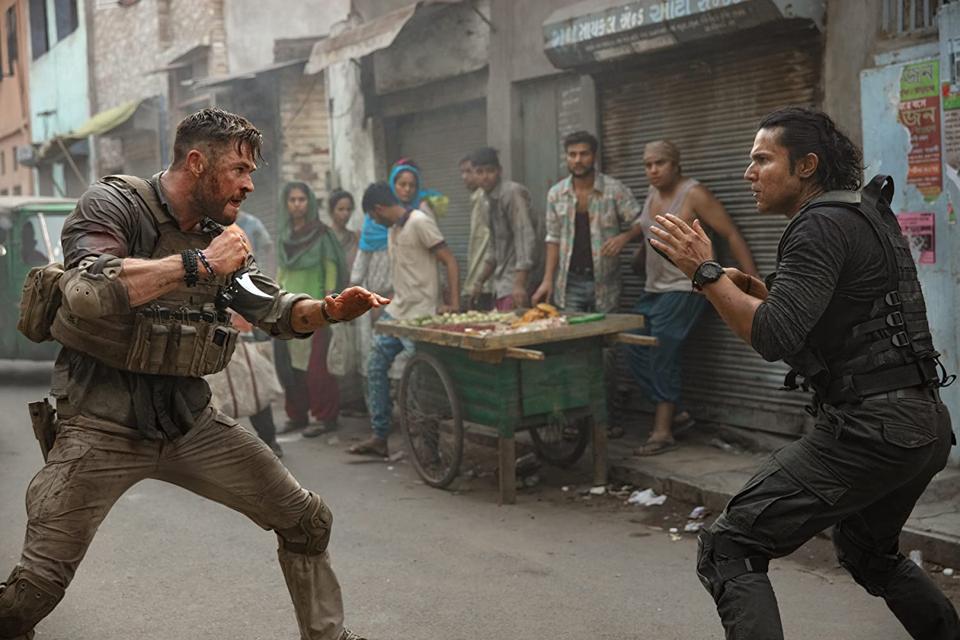 Extraction is an action movie which has recently premiered on Netflix with Chris Hemsworth in the lead role as Tyler Rake, a dour but highly efficient mercenary who gets roped into rescuing the kidnapped son of an incarcerated Indian crime boss.  Sam Hargrave is the director of this spectacularly bloody romp with Joe Russo serving as screenplay writer.  Ande Parks and Anthony Russo share story credit, however that’s not all.  This thing is based on a graphic novel entitled Cuidad, which was written by the aforementioned Joe Russo, Ande Parks, and Fernando Leon Gonzalez.  The cast includes David Harbour, Rudhraksh Jaiswal, Randeep Hooda, Pankaj Tripathi, and Priyanshu Painyuli.

Well, I already mentioned the basic plot in the introductory paragraph, and the story doesn’t get much more complex than that. This film is incredibly bloody, however once you realize that it is based on a graphic novel, the violence is somewhat expected.  The choreography is actually quite good.  Hemsworth puts forth a strong performance.  The character is a little cliche, but Hemsworth sells it enough for me to not resent that much.

I also rather liked the setting being somewhere that is not represented very much in the films I usually see.  I didn’t notice any weak links in anyone’s actual performance.  The kidnapped boy was played by Jaiswal, and he did pretty good partnered with Hemsworth through most of the movie.

The film works pretty well for the most part.  I am sure some of the professional critics will have some less than flattering observations about this cinematic offering, but I ended up enjoying it well enough in spite of the shocking amount of violence.  This is a brutal display at times, however it still manages to make some kind of sense considering the plot and the type of characters involved.