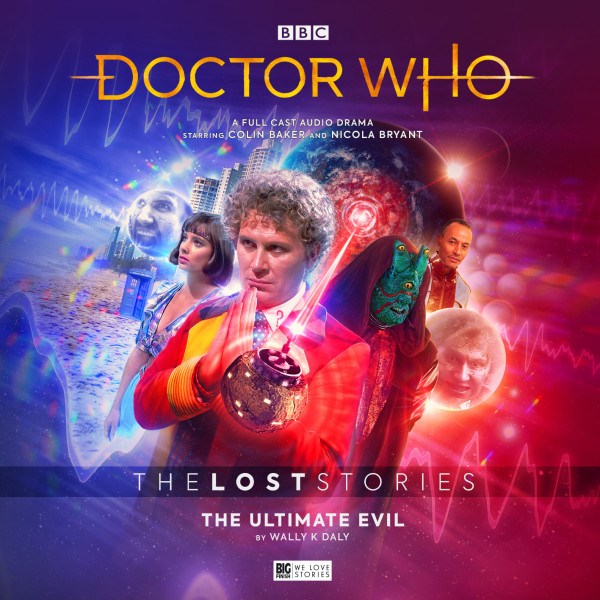 The Ultimate Evil is a Doctor Who audio play presented by Big Finish Productions and stars Colin Baker alongside Nicola Bryant.  Wally K Daly initially wrote this script for the television series in the 1980’s, however it ended up not being produced back then. It is now presented as an episode in the range known as The Lost Stories. Helen Goldwyn take her place in the director’s seat for this one.  It’s a talented roster of guest actors which includes Robin Sebastian, Paul Panting, and Kim Durham.

The Doctor is rather strangely put out when the TARDIS has decided to work perfectly, robbing the fidgety Time Lord of a way to occupy his time between cosmic crises.  When Peri suggests another attempt at a holiday, the Doctor is skeptical but seeks the counsel of some long-forgotten device which recommends some time on a planet known as Tranquela.  A greedy arms dealer is there waiting and has a weapon that can alter people’s emotions and keep is profits alive by goading an ongoing war…a war that threatens to count the Doctor and Peri among its casualties.

Once again, Colin Baker gets to engage in a bit overacting when the Doctor is affected by this hate ray.  It actually works well enough on audio, and I do not mean that description as harshly as it sounds.  Baker actually seems to have some fun, which is really quite evident in all of his appearances.  The return of the Sixth Doctor and Peri is welcome.  The sound effects are as effective as ever.  I liked Sebastian’s performance as Mordant, the ruthless salesman who is wanting to perpetuate the war on Tranquela for the sake of his profit margin.  It probably would have been a fun episode to see, but listening to it isn’t bad either.  Baker makes a somewhat curious distinction between his Big Finish performances and the television version of the Doctor.  I actually found his portrayal to be closer to how Big Finish has evolved the character than how he appeared in the 1980’s, which is a good thing.  I enjoy the Sixth Doctor much more in the audio productions.  There is some interesting history to this story.  Big Finish went a long time without the rights needed to bring this episode to life, but they finally pulled it off with the participation of the original author.  Overall, it was worth the wait.