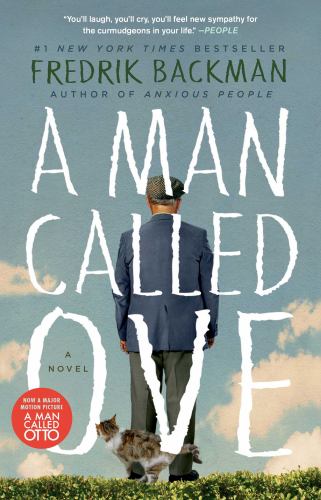 “A Man Called Ove” is a novel written by Swedish author, Fredrik Backman and centers around a curmudgeonly widower who finds that new neighbors aren’t always a bad thing.

Ove always struggled with liking or connecting with people, but he does find someone to love which is revealed in some flashbacks scenes peppered throughout the book.  Not long after his wife’s death. Ove meets his new neighbors after they back an RV over his mailbox.

Ove is an interesting fellow, but I have a soft spot for literary curmudgeons. He is quite the tortured soul who ends up being of some help to people without quite meaning to. I guess one could call him the quintessential study in contradictions.  The novel shifts back and forth between scenes of some hilarity and moments for sorrow.

A novel of this sort isn’t my usual genre of choice, but I rather liked this one.  If I had to express some disappointment, it would be that Backman really doesn’t get much into showcasing any real unique facets of Swedish culture.

It’s a pretty charming novel with more than a bit of poignancy to it as well.  Long live the curmudgeons!

Next up, I will be returning to one of my favorite series, although the TARDIS’s journey didn’t start between the pages of a novel.  It’s time to see what Una McCormack can do with latest TARDIS crew in her latest Doctor Who novel, “Molten Heart”.