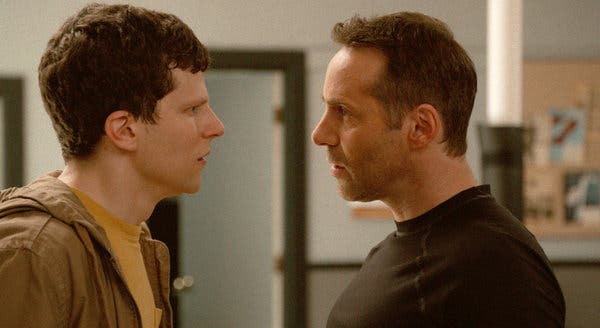 The Art of Self-Defense is described as a black comedy thriller, at least by Wikipedia.  It is written and directed by Riley Stearns.  Jesse Eisenberg, Imogen Poots, and Alessandro Nivola are the stars of this unusual little piece.

Okay, this isn’t a well-known film that was released in 2019, and it really doesn’t need to be.  Eisenberg plays a uniquely timid bookkeeper who gets attacked by a motorcycle gang after he has to run out to get dog food.  Casey Davies, the main character, comes across a karate dojo and meets a rather intense and eccentric sensei.  But there ends up being more to the lethal lessons than Casey realizes.

This is just a weird movie.  It’s not completely devoid of interesting moments and revelations, but it also does not lack in more obnoxious elements.  Eisenberg has always been a hit or miss with me and this film didn’t really help me appreciate him more.

He chooses to communicate in this flat, staccato delivery that is not rally explained.  Everyone comes off as kind of flat as well.  It made the film something to be more endured than enjoyed.

Nivola was somewhat interesting in his performance.  He displayed some sudden shocking violence at times.

I basically sat through this out of a sense of stubbornness in honoring my self-imposed commitment to seeing different kinds of films.

It will likely appeal to someone of a different sort of humor and temperament, but I didn’t find much that was worth the time.